I’ve never shot anything more than a water gun in my life.  And if you’ve followed me on Facebook at all, you probably know that I have pretty strong feelings about the need for sensible gun control in America.

I’ve gotten into some tense (but mostly civil) debates with several people about gun laws.  As typical with most Facebook debates, neither side was usually moved and we went out separate ways until the next mass shooting instigated the next debate.

One person I’ve debated with the most has been my friend and former Improv student Buck.  We usually don’t see eye to eye on gun legislation in this country.  In one of our last debates, he asked me if I’d ever shot a gun.  I said no.  It was never something that never really appealed to me, and definitely appealed less to me in recent years.

But he brought up a good point.  I was debating against something that I’d never had any personal experience with.  He invited me to a shooting range with him.  My initial thought was NO.  No way.  Never gonna happen.

Then I thought about it a little more.  And I thought, if I’m really going to take such a public stand against certain gun laws, I wanted to have some experience with one that would be in a controlled environment.

So I said yes to his invitation to the shooting range.

Yesterday was our Gun Date.  I was more nervous than I anticipated or even admitted.  We went to Insight Shooting Range in Artesia.

I was a bit surprised to see the variety of people who there at 11:30 in the morning on a Saturday.  Artesia is a pretty diverse neighborhood, and that diversity was well represented in the range.  There were people of almost every race, and even one gay couple.

First thing I noticed was how loud it was.  Even though the actual shooting was happening in another room, it was loud and a bit scary.  There were so many guns in the counter display and on the wall and thank goodness Buck was there because he knew exactly what to ask for.

We gave the guy behind the counter our IDs, and were assigned a lane.  Like bowling.  We were asked to pick a target.  I was a little unnerved that the majority of target sheets were human shaped.  I chose the traditional circular target.

We started with Buck’s personal Glock-19.  We put on our noise cancelling headphones, which created an eerie silence.  Even through the headphones, the noise of the gun shots in the room were loud and startling.  I couldn’t help but imagine how loud and scary they would be in an environment where I wasn’t provided with headphones.

We then went to Lane 3 and began.

Buck taught me how to loud the Glock.  He reminded to keep my finger off the trigger and point the gun away from me while loading.  Unfortunately, I needed to be reminded of that a couple of times.  My nerves got in the way of my intellectual understanding.

Then it was my turn.  I held the gun in my hand.  I had to be reminded again not to put my finger on the trigger until I was ready to shoot.  I stared my target down, took some deep breaths, and shot.  The power from the gun rocked me.  But being “a man,” I couldn’t show it.  So I shot a few more rounds until the gun was empty.  A few of the bullet cases flew back and hit my chest and legs.  In terms of hitting my target, I did okay.  Got some very near the middle circle.  Some were on the outer edges.  I don’t think I ever missed the target completely. 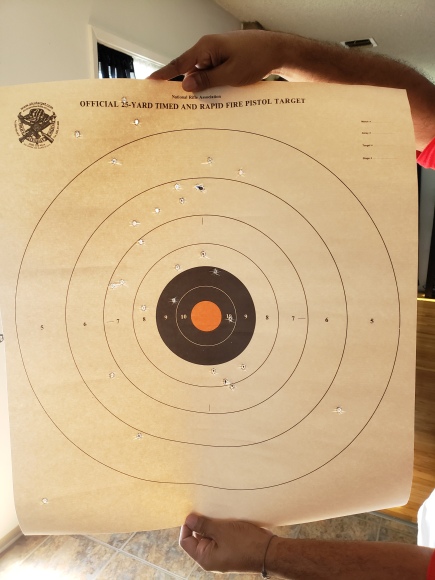 Once we were done with the Glock, we went back to the front counter to rent a 12 gauge shotgun.  The size of this weapon intimidated me, and I wasn’t sure I even wanted to try it, but I had made a deal with myself that I wasn’t going to back down from.

Once again, Buck taught me how to load the weapon, and once again, I needed safety reminders.  Then it was time to shoot the shotgun.

Buck went first and pointed out the different type of bullet markings.  With the clock there was a single entry “wound” on the target.  With the shotgun there was one main entry surrounded by dozens of tiny additional entries.  This weapon would do more damage.

When it was my turn, Buck showed me how to hold it against my shoulder and cock it to get it ready.  More deep breaths and then I shot.  The kickback on this hurt.  This was a powerful machine and I felt smaller than it.

We reloaded it once, did some more shotgun shooting, and then moved on to the AR-15.

This was the weapon I was most nervous about using.  I felt like maybe I was being a hypocrite for holding it while I’ve championed so hard against it online.  I felt a little bit of shame using it for “an experiment” when so many people have needlessly died from them in mass shootings.  But again, I made a deal with myself, and I needed to know what it felt like to shoot one of these.

Neither of us had ever used one of these before, so the man in the counter gave us a one minute lesson in how to load it, and then we were handed it and sent on our way, with a new stormtrooper shaped target.

With the noise cancelling headphones on, we walked into the shooting range room as I carried the gun, facing upwards.  It was one of those moments in life that felt like it was in slow motion.

When we got to Lane 3, Buck showed me again how to load it.  I went first this time.  I aimed the AR-15 at the stormtrooper, set my target on its head, and shot.

This didn’t have the same kickback the shotgun had.  In fact, it was an “easier” shoot.  It was harder to see the points of entry on the target, and I wasn’t even sure I was hitting the target until we pulled the target back up to us and I saw that I had.  They were tiny, but powerful, holes.

I shot the AR-15 three times, and then that was enough for me.  Buck took over and finished off the rounds.

And then we were done.

We went out to lunch afterward, talked about the experience, as well as a variety of other topics, and engaged in what I think was healthy conversation and some debate.  It was a lot easier to pick up on conversational intent face to face instead of Facebook to Facebook.

So, what did I learn through this experience?

I’ve been emotionally drained by the string of mass shootings that have haunted our nation these last few years.  And I’ve wanted sensible gun laws, but haven’t been able to quite define what that means for me.

After my experience at the shooting range, I walked away with two prevailing thoughts on gun laws, that I hadn’t previously focused in on.

The first, TRAINING TRAINING TRAINING.  It boggles my mind that I can go purchase any of these weapons without any proper training.  I’m not sure if you get a set of directions when you purchase a gun, but based on the amount of times Buck had to remind me how to safely load the weapons, I am not comfortable with the fact that anybody can bring these into their homes and just figure it out on their own.

Now what training looks like and how it’s implemented, I don’t have an answer for that.  But it needs to be addressed, in my opinion, on a governmental level.

That brings me to my second point.  I firmed up my disbelief that gun laws aren’t even being brought forth to be debated in this country.  In my view, while the NRA has so many politicians in its pocket, no real debate is going to come through on a governmental level.  If a bill could at least be put on the floor, discussed, debated and voted on my our elected officials, that would be something.  Even if the vote didn’t go the way I wanted, at least it was hashed out.  From what I’m seeing, bills are being killed before they are even materialized.

Today, my shoulder hurts from the kickback of the shotgun and I have some red marks there that will likely turn into a bruise.  I have some photos and videos as proof that I did this.  And I feel slightly more informed about these weapons that I’ve argued for stronger laws about.

Would I ever go back again?  I do have to say there was something sort of appealing about trying to hit a target.  I like “winning.”  But I think I’ll stick to the carnival games where I’m only shooting water to fill up a balloon and win a chance at a stuffed animal.